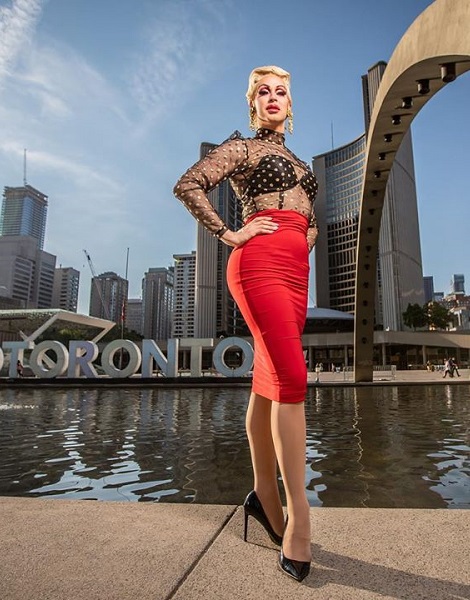 This Queen Is Always On Pointe

Before introducing his drag alter ego to the world, this Toronto-based influencer studied dance extensively. Ms. Hytes studied ballet at the National Ballet School of Canada for five years before taking her talents across the globe. She performed at the Cape Town City Ballet in South Africa and later moved to New York City where she joined Les Ballets Trockadero de Monte Carlo (an all-male drag ballet company) as a principal ballerina.

Hayhoe soon permanently traded in Pointe shoes for platforms, before taking the stage as the fierce and fabulous drag queen, Brooke Lynn Hytes.

The Queen Of The North

Never fear, the Queen of the North is here. Oh, and did we mention that she has a very impressive resume as a polished drag queen. In 2014, she took home the coveted crown in the Miss Continental pageant.

Brooke’s popularity surged in 2019 when she was one of fifteen contestants competing on the eleventh season of RuPaul’s Drag Race. As the first Canadian contestant on RuPaul’s Drag Race, she quickly established herself as a frontrunner in the competition by winning 3 maxi-challenges and 3 mini-challenges. Despite a stumble or two, Brooke always managed to dazzle the judges with the same energy she brings to the dance floor. Brooke Lynn Hytes ultimately finished the season as a runner-up, losing to Yvie Oddly in the final lip sync for the crown.

Extravagant Looks From The House Of Hytes

To refer to Brooke as a fashion icon would hardly be doing her justice. She rocks every outfit she wears, and never strays from bold and sexy looks. Her all-black ensemble from a recent photoshoot consisted of a shiny one-piece, sharp hat and bold red lip that only Brook could pull off so well. Between funky unconventional numbers like that to the high slit red gown she showed off by Dallas Coulter, Brooke knows high fashion and elegance like no other.

If she isn’t already at the top of your list of style symbols, it’s time to get up to date with Brooke Lynn Hytes and the looks she’s serving up. She’ll inspire you to ditch your boring tee and jeans for an elaborate new wardrobe.